HARLEM CANVAS FOR CHANGE
BRINGING ART DOORS TO YOU

ART DOORS is a project where the 125th Street BID worked with property owners to allow artwork to be created by the community on the outside of the doors that they use to receive their freight. Often these doors become eyesores as they are set back from the building line and they fall victim to being a place for where we have witnessed public urination, graffiti, litter and more.

The 125th Street BID saw the unsightly conditions as another opportunity for placemaking community engagement with the community. The 125th Street BID presented a challenge to the NYPD Explorers program and a community organization “YOUTH ON THE MOVE” to use the doors as canvases to express their thoughts and feelings about human rights and social justice.   This black and white exhibit brings a new look to 124th Street between Frederick Douglass Boulevard and St. Nicholas Avenue.

A special thanks to Barbara Askins, who shepherded this wonderful free outdoor art exhibit.

The Lee Building. Park/125. As seen on a dull day from the Metro North platform.

Festivities kick off at 5 p.m. on West 125th Street just east of Broadway, with a Parade of Lights Kickoff. Then the parade will go south along Adam Clayton Powell down to 110th Street, and then come back on Lenox but go around Marcus Garvey Park and then head west again on 125th.

There will be a tree lighting at Marcus Garvey Park and neighbors and businesses offering hot drinks, promotions, and more. 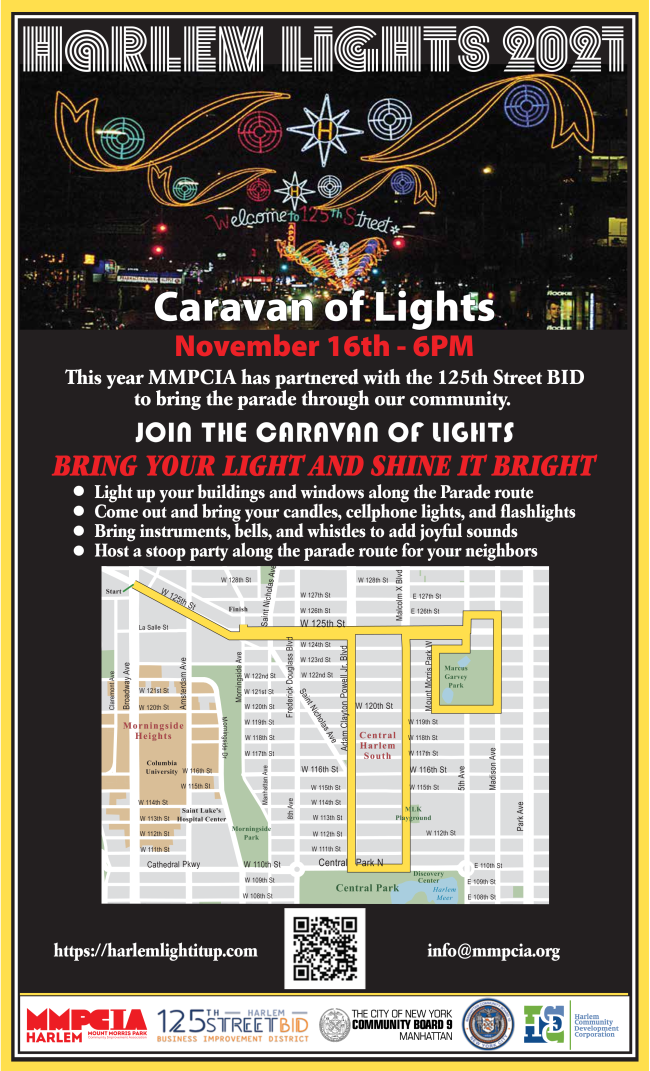 The first trailer for Amazon Prime’s new comedy, Harlem, has been released. Created, directed and executive produced by Tracy Oliver, the series follows four best girlfriends living in the famed neighborhood in Upper Manhattan as they attempt to navigate love, life, and their careers.

Premiering on Friday, December 3, Harlem stars Meagan Good as “Camille,” a young anthropology professor at Columbia with plenty of knowledge about dating but struggles to find balance within her own love life. The series also features Quinn (Grace Byers), a hopeless romantic and fashion designer fighting to keep her business afloat, Angie (Shoniqua Shandai), Quinn’s roommate, a confident and high-spirited singer, and Tye (Jerrie Johnson), a queer tech entrepreneur who keeps romantic partners and vulnerability at a distance.

Barbara Askins, the indefatigable head of the 125th Street BID, has written a powerful letter to NYC Police Commissioner Shea and Mayor De Blasio regarding the increasingly intolerable quality of life issues in Harlem.

A very, very rare 19th (or maybe early 20th) century boot scraper, embedded at the base of brownstone steps.

Its survival is likely because it was embedded in a granite paver that the stoop rose from. No one has replaced the granite (tough work) with a cement base over at least a century.

This one is looking south on Lenox from 125th Street:

And below is a view 180 degrees different – North on Lenox:

To learn more about the 125th Street BID, see:

The impact of Dapper Dan on Hip Hop fashion continues to reverberate in the 20th Century.

L’Officiel has a good story about Dapper Dan and Gucci (among other fashion houses):

For more details on the festivities, see: https://harlemlightitup.vamonde.com/posts/event-details-turn-on-the-lights/10455/

What the site doesn’t say is that one of her husbands – Arthur Miller – lived almost where the camera is, taking the photo. Miller was born in Manhattan and lived as a boy in Harlem in a spacious apartment overlooking Central Park. His father, Isidore, a Jewish émigré from Poland, owned a clothing business that allowed the family a certain level of luxury: three bathrooms, a chauffeur-driven car and a summer place in Far Rockaway. Before the stock market crash, the business began to fail, and so, in 1928, Isidore and his wife, Augusta — Izzie and Gussie — moved the family to the borough of churches and cheap rents – Brooklyn.

Arthur Miller wrote about the summer heat of New York, and how families near Central Park would cope in the New Yorker in 1998:

The city in summer floated in a daze that moved otherwise sensible people to repeat endlessly the brainless greeting “Hot enough for ya? Ha-ha!”

Exactly what year it was I can no longer recall—probably 1927 or ’28—there was an extraordinarily hot September, which hung on even after school had started and we were back from our Rockaway Beach bungalow. Every window in New York was open, and on the streets venders manning little carts chopped ice and sprinkled colored sugar over mounds of it for a couple of pennies. We kids would jump onto the back steps of the slow-moving, horse-drawn ice wagons and steal a chip or two; the ice smelled vaguely of manure but cooled palm and tongue.

People on West 110th Street, where I lived, were a little too bourgeois to sit out on their fire escapes, but around the corner on 111th and farther uptown mattresses were put out as night fell, and whole families lay on those iron balconies in their underwear.

Even through the nights, the pall of heat never broke. With a couple of other kids, I would go across 110th to the Park and walk among the hundreds of people, singles and families, who slept on the grass, next to their big alarm clocks, which set up a mild cacophony of the seconds passing, one clock’s ticks syncopating with another’s. Babies cried in the darkness, men’s deep voices murmured, and a woman let out an occasional high laugh beside the lake. I can recall only white people spread out on the grass; Harlem began above 116th Street then.

Later on, in the Depression thirties, the summers seemed even hotter. Out West, it was the time of the red sun and the dust storms, when whole desiccated farms blew away and sent the Okies, whom Steinbeck immortalized, out on their desperate treks toward the Pacific. My father had a small coat factory on Thirty-ninth Street then, with about a dozen men working sewing machines. Just to watch them handling thick woollen winter coats in that heat was, for me, a torture. The cutters were on piecework, paid by the number of seams they finished, so their lunch break was short—fifteen or twenty minutes. They brought their own food: bunches of radishes, a tomato perhaps, cucumbers, and a jar of thick sour cream, which went into a bowl they kept under the machines. A small loaf of pumpernickel also materialized, which they tore apart and used as a spoon to scoop up the cream and vegetables.

The men sweated a lot in those lofts, and I remember one worker who had a peculiar way of dripping. He was a tiny fellow, who disdained scissors, and, at the end of a seam, always bit off the thread instead of cutting it, so that inch-long strands stuck to his lower lip, and by the end of the day he had a multicolored beard His sweat poured onto those thread ends and dripped down onto the cloth, which he was constantly blotting with a rag.

For the full essay, see: https://www.newyorker.com/magazine/1998/06/22/before-air-conditioning